Caviar is the egg of caviar fish and is the most expensive food in the world. Caspian Sea is recognized as the main habitat of caviar fish in the world. Caspian Sea caviar fish are the fish that are so-called migrating, so different environment and bio-feed influence their eggs size and taste.
Caviar is one of the Iran’s export products. In fact, pure Iranian caviar is a term that is used for vast export for this product.
There are several types of caviar which include 27 species of fish, 6 of them are living in the Caspian Sea. caviar fish meat is like other fish. But what make it different from other types of fish is their eggs which is also known as the Black Pearl. In addition this type of fish is also called living fossils in the world that live like phylogenetically evolution. caviar has three different types of color including golden, red and black.
Among these, black caviar is more popular and has more importance in term of exportation. caviar can be divided into farmed and Sea.
93 percent of the world’s caviar is in Caspian Sea that five valuable caviars come from the sea. 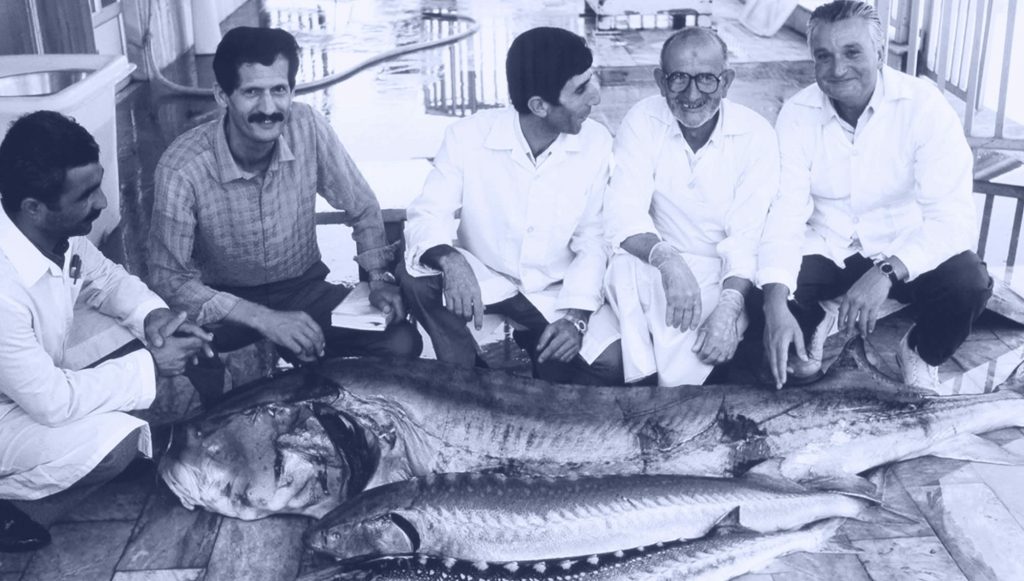 Each sturgeon gets checked and separated based on type and age of the fish. Fish reaching maturity are separated and checked regularly. Ultra sound is a method used by many to check whether the sturgeon is ready for harvest.

Caviar is a general term used for a variety of fish roes which range from being common and inexpensive to one of the rarest and most expensive delicacies in the world. Market prices are driven by factors such as type of sturgeon, age, rarity, origin, size, texture and color.

A higher grade of caviar has a more mature caviar. First and foremost is taste, a higher grade will feature a flavor with more depth and strength. It will also have a firmer texture and larger eggs for a bolder mouthfeel. Higher grades of caviar also typically have a lighter color. 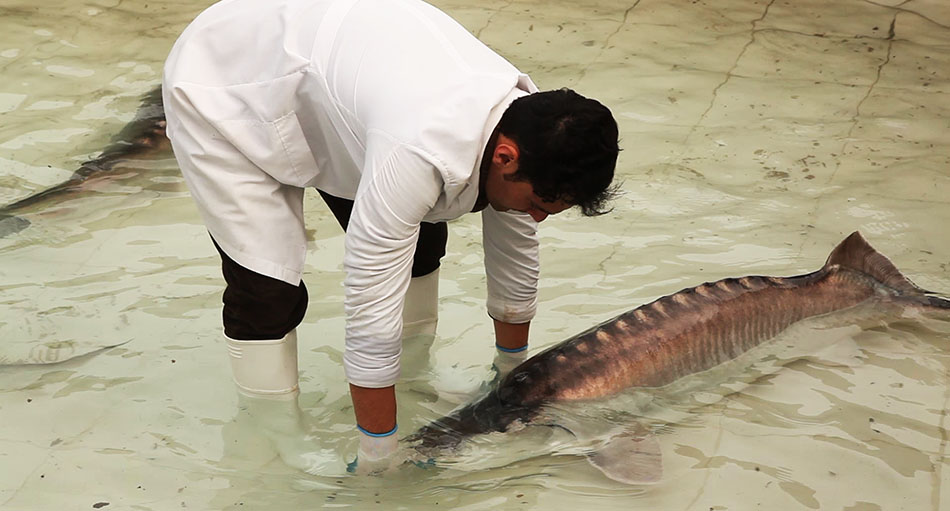 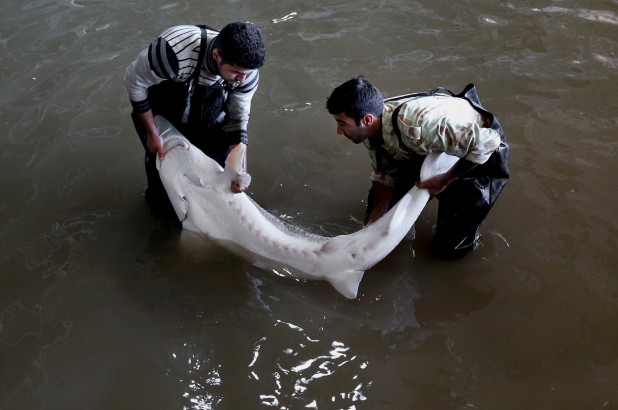 The 4 most valuable types of caviar are Beluga, Osetra, Sevruga and Bearii. Typical Iranian beluga caviar is prized for its soft, extremely large (pea-size) eggs. It can range in color from pale silver-gray to black. Next in quality is the medium-sized, gray to brownish Osetra (Ossetra), and the last in the quality ranking is smaller, gray sevruga caviar.  Many caviar lovers prefer the rich flavors of the Sevruga and osetra over the more expensive beluga roe. No country can compete with Iran in processing and producing caviar because Iran’s caviar is well known as the best of its kind across the world. 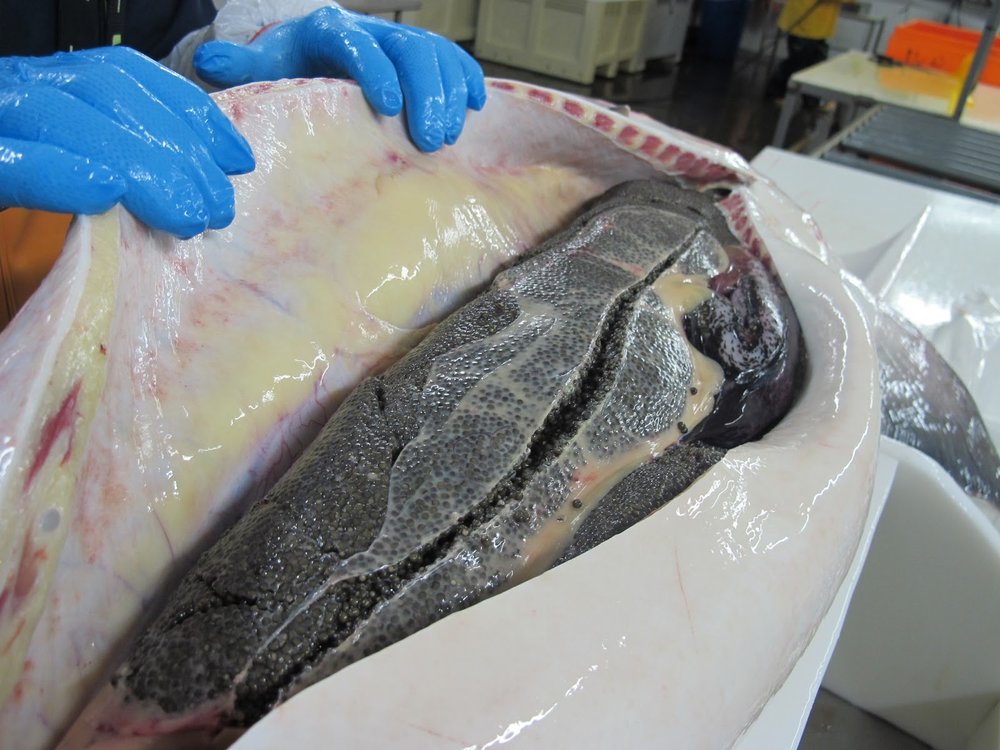 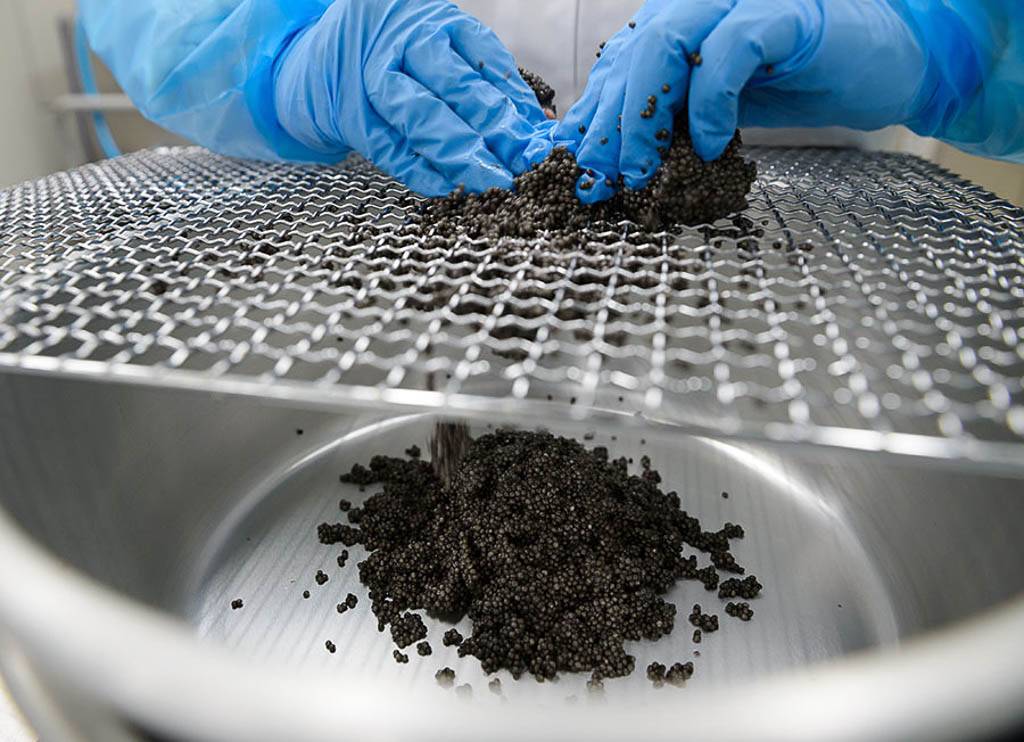 There are four types of caviar that Beluga caviar, Osetra, Sevruga & Bearii caviars are the most valuable types.

BELUGA CAVIAR:
The most prestigious and renowned due to the time necessary to harvest it, the Iranian Beluga caviar comes from the wild species Huso Huso, raised in our fish farms along the Caspian Sea. This caviar is the strong point of our company since we are the main partners of this fish farm. The basins are filled with the waters of the Caspian Sea, and the sturgeons can find all the necessary nutrients, providing the caviar with a taste, color and texture that resemble very strong the wild caviar. The grains are loose and the color is light brown to gray, giving it a small golden effect. The female beluga sturgeon takes up to 18 years to mature and produce eggs. The most highly priced caviar of all is Beluga. 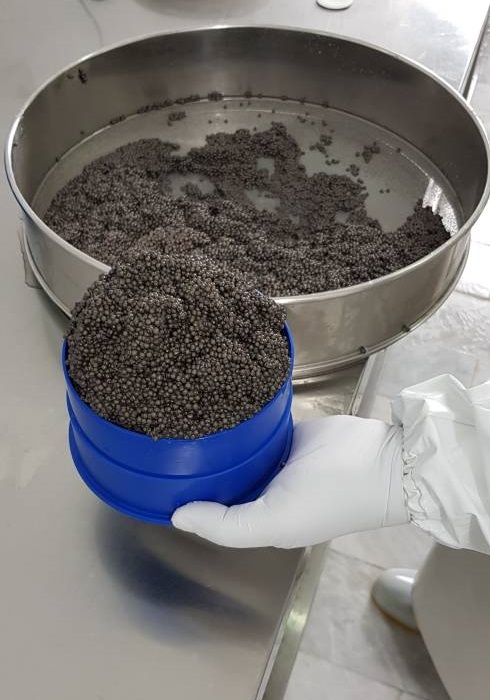 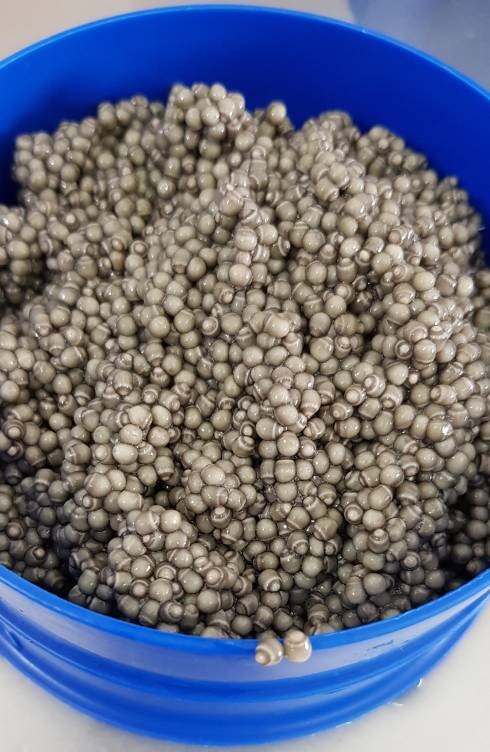 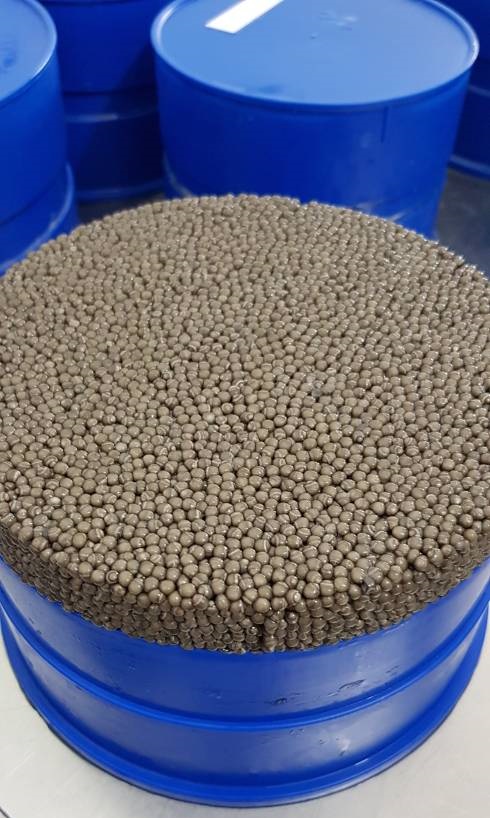 Beluga roe is the largest of 3 types and is the rarest. It has a delicate skin, considerable texture and a visible eye in the middle of each individual egg. Typical Iranian beluga caviar are lighter in color and a subtle creamy flavor with a hint of sweetness on the palate.
Fish farmers around the world begun importing eggs and fingerlings of Caspian sea sturgeon to raise in their regions. Fish farmers mention the fact that sturgeons travel long distances and vary in flavor regardless of where ending up in Caspian waters.
Most farms access natural resources available in their area, but keep a controlled environment for better consistency, a long time mark of quality caviar processing.
The very limited supply of these caviars from the Caspian sea are found in Europe and other regions either on the open or black markets. 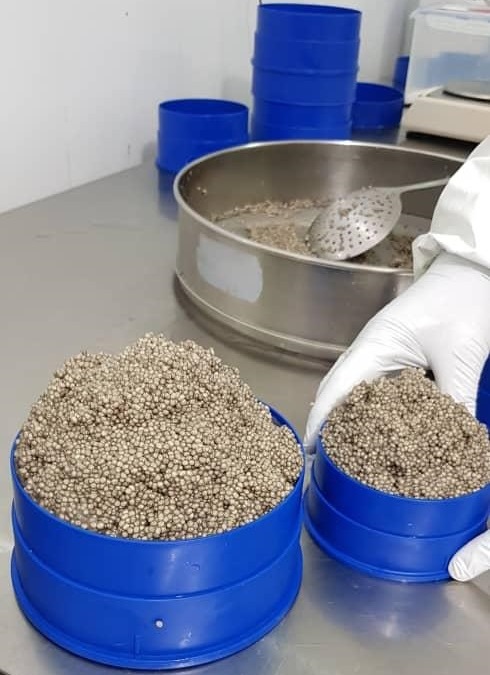 OSSETRA CAVIAR:
The female Caspian Sea Asetra sturgeon is smaller than the Beluga, requiring up to ten years to mature and produce eggs, reaching lengths of up to seven feet and weighing from fifty to two hundred pounds.
Iranian Asetra (also known as Asetra, Ossetra, or Oscietra) is a highly revered sturgeon which produces among the best tasting caviar is the world. As price of caviar is not always based on its taste, the asetra is a better value with a rich taste.
Unparalleled flavor of any other sturgeon, this caviar offers a unique flavor rarity that is rich, nutty flavor and firm creamy texture with an elegant appearance.
Sevruga and Asetra sturgeon roes are less expensive as they mature sooner for harvest. Asetra caviars has a delicate skin and ranges in color from dark brown to gray and is often shaded with a gold.

SEVRUGA CAVIAR:
Sevruga are generally smaller and mature earlier than the Osetra after only 7 years, and given their early maturation.
Sevruga in the wild may grow to lengths of up to 5 feet and at a weight of close to 150 lbs. They are most distinguished by their long snout and elongated form. The Iranian sevruga caviar offers rich flavors from the most sought after Caspian sea harvests.
Iran along with Russia has historically been at the top of the most cherished caviars in the world. Intense flavor of the sevruga sturgeon’s caviar is recommended and noted to be better than the most prized beluga sturgeon’s. Sevruga roe is the least rare of the three. It has a delicate skin and its color ranges from light to dark gray. Since they are the least rare, they are also the least expensive, thus, sevruga roe is the most popular out of the three prized types of caviar. The cherished natural robust flavors from the sevruga sturgeon are a favorite of caviar lovers, chefs and fine restaurants.

BAREII CAVIAR:
Baerii Caviar is originally comesfrom the Siberian sturgeon, it is one of the smallest sturgeons, its weight rarely exceeding 10 kilos. The Baerii caviar is close in appearance and texture to the grain of the Sevrugea Caviar. Medium to small size, its gray to light gray eggs joyously burst in the mouth, leaving a sweet, nutty flavor.

TASTING CULTURE
Caviar which is considered to be royal delicacy has to be properly served and tasted. Although it sounds snobbish, it is said that you don’t eat caviar, you taste it.
You have to remember that it is not always love at first taste.
Caviar should be properly chilled to preserve its freshness. It is very sensitive to temperature. You can keep caviar in the refrigerator but not in the freezer!
You serve caviar in chilled glass dishes (bowls), preferably made of crystal. The bowl should be placed on crushed ice. It guarantees fresh flavour. 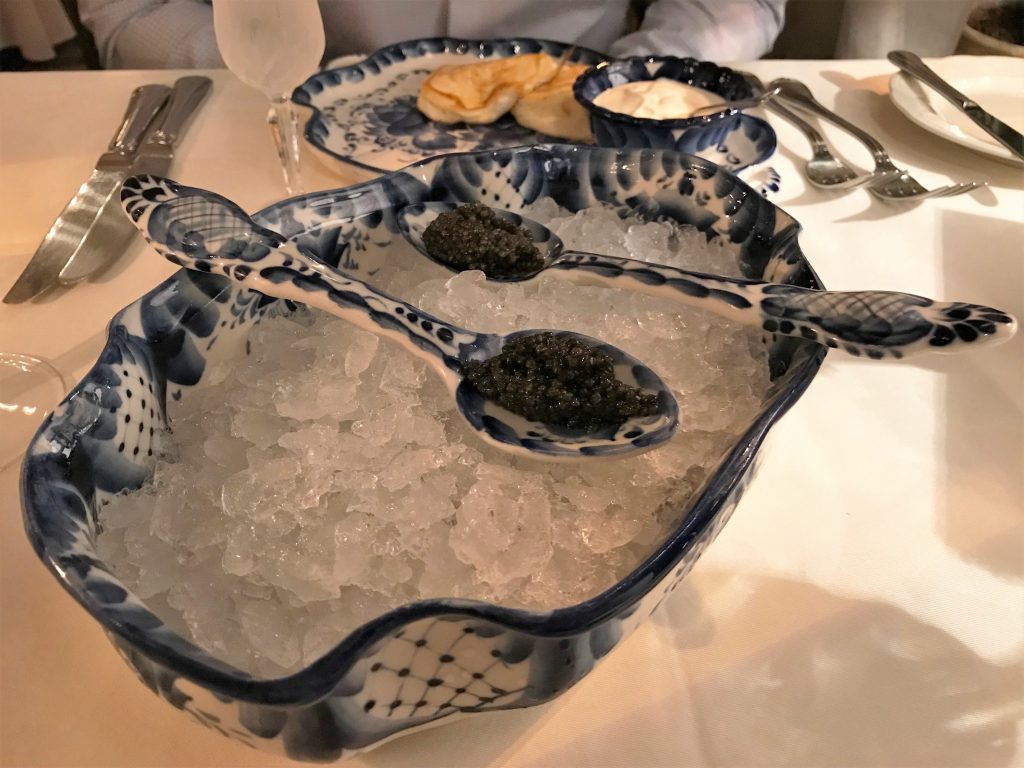 CAVIAR PROPERTIES:
This nutrient can help to prevent cardiovascular disease. Because the concentration of omega-3 fatty acids in caviar is high and it is useful for cardiac patients. There is a compound called “ctacosand” In caviar which is a long-chain fatty alcohol, and after it enters the body, can be converted into fatty acids. These fatty acids have a major influence in the formation of myelin synthesis (covering nerve cells). In other words, nerve cells health can be obtained by eating caviar. Research has shown that people, who consume caviar, are less exposed to the risk for mental illness, including depression. Since there is omega 3 fatty acids in caviar, consumption of these foods can prevent the increase of blood cholesterol. Caviar prevents rheumatoid arthritis (inflammation of the joints (gastrointestinal diseases)) and some types of cancer. There is a lot of iron in caviar. People who have anemic can eat caviar. 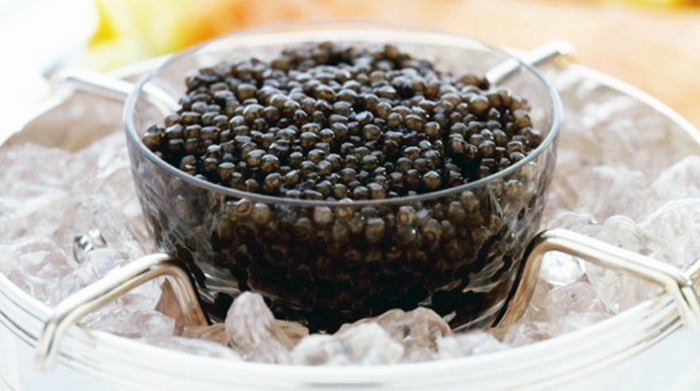 These are some benefits of eating this appetizing delicacy:
-Aids to prevent heart attacks, high in omega-3 oils
-Helps to lower blood pressure, high in potassium
-Anti Stress and anti migraine, rich in vitamin B2,B6,B12,A,D,C,E
-Beneficial for bones, high amount of calcium
-Has an antidepressant effect,
-Muscle developer, high in protein
-Ally of sportspeople, high in iron